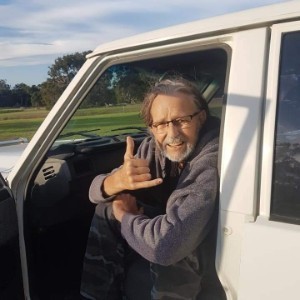 In memory of stuart buxton

Please support us
during this time

Together we will keep their star shining bright

To our family and freinds,

I am sharing this page with you in memory of my partner Stuart, who passed away on 29th March 2021 after a 2 year battle fighting Acute Myloid Leukaemia.

Stuart was first diagnosed on 1st April 2019, when he presented to casualty in our home town of Albany with a suspected neck injury after an accident at work. He was cleared of injury to his neck, but received the news that his blood test results indicated he had Leukaemia. 48hours later Stuart was flown to Perth where his diagnosis was confirmed as AML and 3 days later he began his first round of chemo.

Stuart spent 3 and half months in Perth during which time he was unable to return home to Albany and we nearly lost him after he developed pnuemonia during which he experienced multiple organ failure. Stuart fought his way back and returned home to us in remission July 2019.

On December 31st 2019 after one of many blood tests he regularly received, we were told the leukaemia had returned. 3 weeks later we were told it was terminal as Stuarts heart had been damaged during his previous chemo, leaving him physically unable to go through a bone marrow transplant. The most they could offer were regular injections of chemo in an attempt to put the cancer back into remission or at least slow its spread so as to give Stuart more time. Without treatment AML gives a life expectancy of 3-4 months. With treatment they gave Stuart between 6-12 months, the average for most being 9 months.

Stuart lost his battle just days before he reached 15 months from the date we found out the cancer had returned.

I want to honour Stuarts memory with this tribute in support of the work of the Leukaemia Foundation. And I want a future where no lives are lost to blood cancer.

A donation in memory Stuart means his legacy will have a lasting impact for years to come.

Stuarts life will continue to help all Australians with blood cancer access the best treatments, care and support they need to survive. His legacy will power ground-breaking research meaning fewer families in the future, will go through what we have been through in the past.

Please help me honour Stuarts legacy by using the 'Donate' button. The more people who know about the Leukaemia Foundation's work, the greater their impact, so please spread the word by sharing my page with your friends, family and colleagues.

Thank you in advance for your generosity. You will be giving an incredible gift of hope.

Thank you for your kind support

Big hugs to you Kel. Definitely miss Stuie. He was one of a kind 💗💗